Addressing the press on Monday, April 20, Magoha had indicated that while the government had not announced its final stand on postponing the exams, he was still optimistic that everything would still run on schedule, given that a majority of students were still studying at home.

Sossion dismissed the idea that students were benefitting from the government’s initiative to educate learners via new-age media such as online platforms, given that a majority of people could not afford access to the program.

“We have done an assessment of e-learning even with respect to all across the world and it cannot work in third-world countries. Let us take for example the ordinary households in Kenya, both the middle class and low-class,

“Do they have radios or TVs? Even if they have them, how can you ensure the connectivity of the 320,000 teachers with their learners? How can we ensure effective learning control and interaction across the network?” he posed.

Sossion used the ambitious laptop project by the Jubilee Government as a case study of how the current use of Information and Communication Technology (ICT) to educate the students could be a major flop.

He insisted that the infrastructure was well beyond the Kenyan majority right now and that the content on television was not being well followed up on to establish if indeed the students were benefitting from it.

Sossion further added that even with the content on television, a majority of the parents were operating on survival mode given the effects of the pandemic on the economy and way of life.

“Do the parents who are fighting with poverty, looking for food, and scared of the Covid-19 pandemic have the pedagogical skills to even take their own children through sustained learning?

“This [online learning] is a pure public relations exercise and wishful thinking. It will not work for this country. The best we can do is to continue supporting the government efforts put in place,” he exclaimed.

Sossion insisted that in this way, it would be easier for things to go back to normal and then the resources can be channeled to other sectors including education after which proper frameworks can be put in place to incorporate ICT in education.

He also insisted that CS Magoha should listen to the teachers and consider the suggestions and expertise they are willing to provide on how to go about the exam issue and proper educational practices.

“We have come out very strongly to warn Kenyans that it is too early to talk about postponing the exam without knowing whether we can manage the virus.

“Maybe Kenyans will be one of the few countries that will flatten the curve within a short time once we do that we will have no business shutting down our lives,” he optimistically stated.

Wilson Sossion, S.G. KNUT: We have done the assessment of E learning with respect even to AI & it cannot work in a 3rd world country. What is being aired through media is not effective at all, it reaches about 10% of learners. It is mere wishful thinking & PR avenue #DayBreak 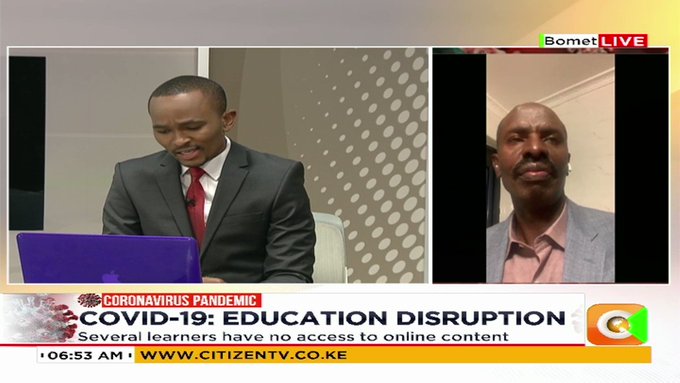 How Various Kenyan Celebrities Have Reacted To Frank...