Kalonzo And Wetangula Join Forces Against Raila Odinga In Kibera 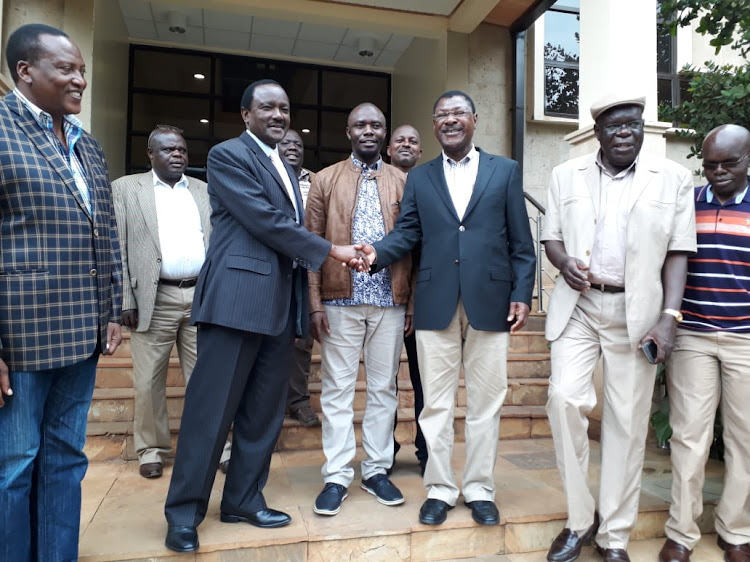 Wiper party leader Kalonzo Musyoka and his Ford-Kenya counterpart Moses Wetang’ula on Friday  ganged up in the race towards  Kibra parliamentary seat a move that will likely give the ODM candidate a fresh headache. The former Raila Odinga running mate stated that he will be supporting Ford Kenyas Khamisi Butichi.

“Ford-Kenya and its leadership stood by our candidate in the Embakasi by-election, and we cannot take it for granted. My brotherhood with Senator Wetang’ula started in the 1980s when I joined politics,” he said.

According to Mr Musyoka, who hosted Mr Wetang’ula at the Wiper party offices in Nairobi, his move to back Mr Butichi is to reciprocate Ford-Kenya’s decision not to field a candidate in the Embakasi South by-election this year.

The resolve to gang up against the ODM candidate, Mr Imran Okoth, signals the deteriorating relations between Orange party leader Raila Odinga and his allies in the 2017 polls.

Julius Mawathe who had won during the Wiper party’s primaries will have to give way to Mr. Butichi in honor of the handshake between Mr. Wetangula and Mr. Musyoka.